-The Story of Goldilocks and the Three Bears by Robert Southey

As was stated in our YE 2016 report, the Tucson MSA multifamily market, after years of general stagnancy following the Great Recession, saw renewed investor interest starting in 2016. According to Elliott D. Pollack & Company, Tucson MSA's jobs were up 0.6% y-o-y and are up 0.5% year-to-date. Additionally, the type of new jobs being created/announced in the Tucson MSA has continued to evolve. In fact, Tucson recently made it onto WalletHub's 2017 Best Places to Find a Job (https://wallethub.com/edu/best-cities-for-jobs/2173/) at #102 (of 150).
Notwithstanding Tucson's sizeable 2,000+ call center job announcements from 2016 through YTD; in 1Q 2017, international mining tech firm, Hexagon, announced its plans to expand and relocate its headquarters to Downtown Tucson joining Caterpillar who announced plans to move there in 2016. Other major job/economic announcements, and referenced on the map on Page 5 of this report, include: ADP's plans to add 250 jobs to the area, Ernst & Young will be hiring 125 as it opens a new support center in Downtown Tucson and Tucson-based Vector Space Systems broke ground on a new facility in the Pima County Aerospace Park and debuted ‘the world's smallest satellite launcher rocket,' after raising $5M in funding.

So Little Construction
In regards to new construction, Tucson MSA had 318 new units delivered by the end of the 1Q, 90% y-o-y increase. Despite near term elevated construction delivery schedules, average rent for the MSA increased 5.4% to $796 while experiencing a mild occupancy rate contraction of (0.2%) to 94.1%. It should be noted that Tucson has a very limited supply of new multifamily projects under construction; Tucson, looking forward, is now at a 5-year low for new units coming online. In fact, our projections show no new ‘market rate' units will be delivered (50+ unit properties in size) to the market until the end of 2018. As such, we're anticipating both Rent and Occupancy Rates to hit market highs of $806 and 94.5% respectively by the end of the year. 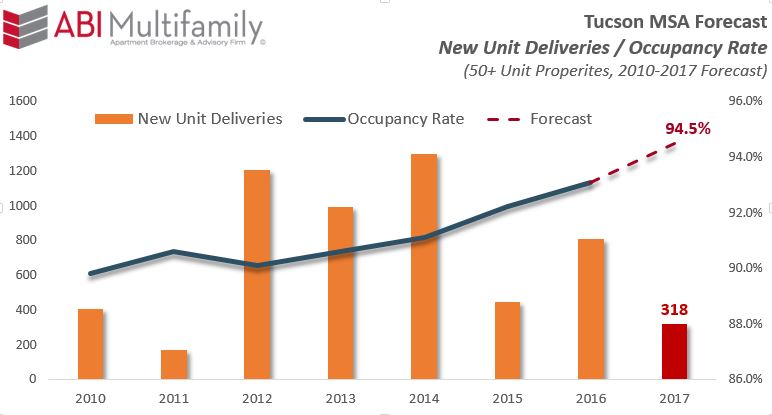 The Road Ahead
As stated in our 2017 Market Forecast, it is unlikely the Fed will continue with its gradual interest rate increase in 2017 despite many economists predicting otherwise. Basis for this sentiment is rooted in weak preliminary 1Q GDP which at 0.7% growth is the slowest in three years, significant instability in international markets, particularly Europe and Asia, and domestic policy struggles of the new Trump Administration. Despite stocks hitting all-time highs, based in large part on investors factoring in massive deregulation, markets the world over have been prone to ever increasing volatility fits.

As a result of high market volatility, and both ancillary observed evidence within our client base and Investment Company Institute's Investment Company Fact Book publication, middle age-to-older market investors have been switching to a combination of passive ETF funds, a now decade-long trend, and purchasing a mix of closed-fund shares and/or direct investments in real estate to provide a more consistent return. This change in investor sentiment, ceteris paribus, will continue to propel real estate transactions, particularly multifamily, into the foreseeable future.

With many of the larger western MSA's reaching, and exceeding, previous peak price per unit amounts has caused investors, on the hunt for higher yield/CAP rates, to look to qualified secondary and tertiary markets. Tucson which saw tremendous economic and job announcement activity through 1Q 2017, and with little in the development pipeline, is fast becoming the ‘go-to' secondary market for multifamily investors. Given Tucson's now 5-year low for projected new unit deliveries and with economic and job prospects at, or nearing, 7 year highs lays the foundation for a market not witnessed by Tucson investors in at least a generation, if ever. The confluence of these two conditions will continue to shape the Tucson multifamily market well into the latter half of 2018 as new units will be brought online. Until that time both, and barring any Black Swan events, Occupancy Rates and Rents should continue to reach all-time highs and make Tucson one of the more active secondary markets in the county.

To view the full report go to: http://abimultifamily.com/abinsight-tucson-msa-multifamily-1q-2017-quarterly-report/