As one LinkedIn user lamented on all of Scottsdale's new multifamily development, "our unofficial bird is now the Crane." Given all the market chatter about overheated multifamily construction, both inside and outside of commercial real estate circles, I felt it prudent to dig a bit deeper into the actual data and metrics of apartment unit construction and the results were, in a word, surprising. The analysis that follows is meant to provide a very top level view of apartment market demand and makes no assertions as to quality/type of build, simply focuses on the actual units that are/will be needed/delivered. In order to streamline the analysis process the following assumptions were made: 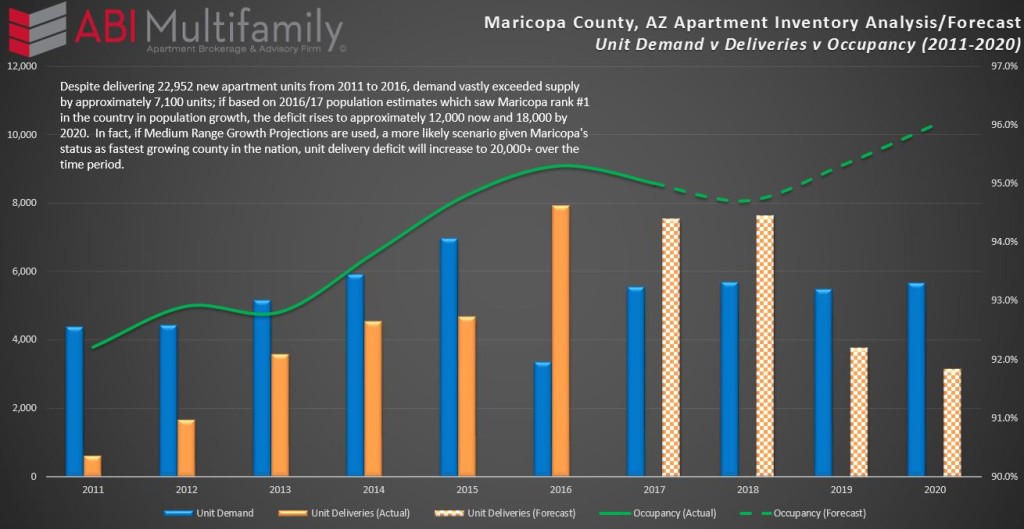 Despite delivering 22,952 new apartment units from 2011 to 2016, demand vastly exceeded supply by approximately 7,100 units; if based on 2016/17 population estimates which saw Maricopa rank #1 in the country in population growth, the deficit rises to approximately 12,000 now and 18,000 by 2020. In fact, if Medium Range Growth Projections are used, a more likely scenario given Maricopa's status as fastest growing county in the nation, unit delivery deficit will increase to 20,000+ over the time period. As a result by 2020, the Occupancy Rate for the Phoenix MSA, barring any unexpected increases in current construction levels, is forecasted to reach an all-time high of approximately 96.0%.

Sales of 100+ unit properties witnessed the greatest sales volume contraction decreasing (33%) y-o-y to $1.13B. Despite volume contraction, average price per unit amount increased approximately 14% to $125,058. Whereas 100+ unit properties saw sales volume decrease, 10 to 99 unit properties saw its volume increase 27% to $153.8M with a surge of 35% in average price-per-unit amounts to $93,297. Price-per-unit increases in the smaller property size category dovetails the sales trend which began in earnest in late 2016 through 1Q 2017, as mid-century built, extensively repositioned properties having been coming back online for sale. In fact, pre-1980's built product represented 84% of all transactions in the 2Q.

The Phoenix MSA experienced a (39%) y-o-y decrease in 2Q 2017 unit deliveries with 1,620 new units delivered to the market. Nonetheless, Phoenix MSA developers are on track to deliver 7,500+ new units by YE 2017. Despite elevated unit deliveries occupancy rates for the MSA contracted slightly, (0.6%), to 95% while average rent increased 5.3% to a market record $1,000. City of Phoenix and Mesa claimed the top spots in the MSA for rent growth at 5.5% respectively, followed by Tempe at 5.4%, Glendale at 4.8% and Scottsdale at 4.4%. Although Scottsdale saw the lowest average rental rate percentage increase of the MSA, it still claims the top spot in actual average rent which at $1,291 is the highest in the region.

For more national/international investors, the Phoenix MSA has long been perceived as a more secondary market when compared to the ‘gateway' markets of Los Angeles, San Francisco, Seattle, New York etc. Beginning in late 2015, amidst the run-up in prices in more coastal regions, investors turned toward more interior-core markets such as Denver and Phoenix in which to find value and yield. Given Phoenix's current business maturation, i.e. from one focused primarily on construction to the Silicon Desert and major financial services/insurance/aerospace/transportation hub, coupled with Maricopa County's ascension to top spot in population growth, will continue to propel the Phoenix MSA now and into the foreseeable future.

To be followed with a more expansive ABInsight post on the topic, I want to leave you with a few thoughts, questions I have posited to various economists, business executives and investors: has the Federal Reserve's, along with the other central banks, massive balance sheet run-up (QE) and zero-to-negative interest rate policy created a banker's worst nightmare, i.e. deflation? By way of example, in our current cycle massive amounts of money have been piled into the development of artificial intelligence, production automation (think automated car production, 3D printed homes, robot burger flippers etc) and other technological disruptions, the effects of which are only beginning to be felt and/or understand. As a result, and my final question, are we on the precipice of a massive reduction in the cost-of-goods? If yes, cui bono?