The analysis that follows is meant to provide a very top level view of apartment market demand and makes no assertions as to quality/type of build, simply focuses on the actual units that are/will be needed/delivered. In order to streamline the analysis process the following assumptions were made: 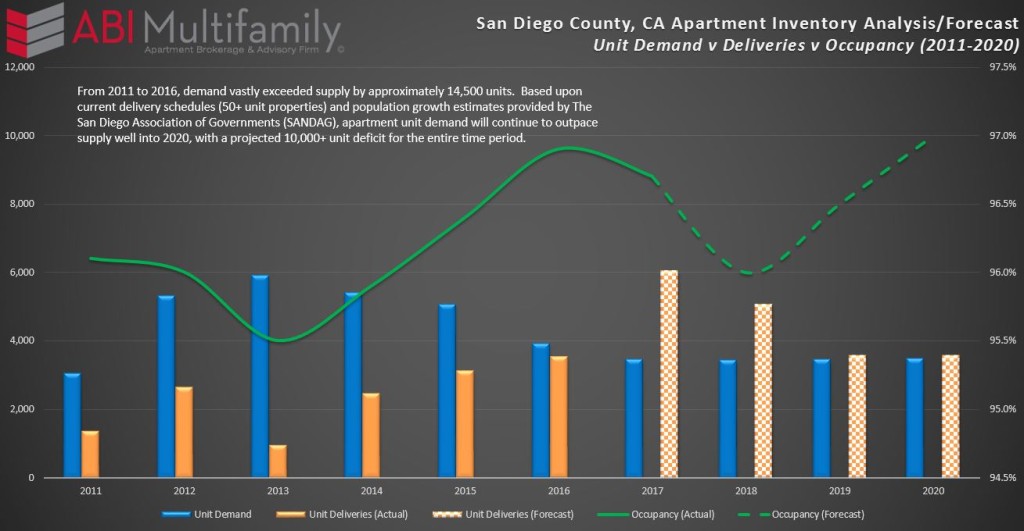 From 2011 to 2016, demand vastly exceeded supply by approximately 14,500 units. Based upon current delivery schedules (50+ unit properties) and population growth estimates provided by The San Diego Association of Governments (SANDAG), apartment unit demand will continue to outpace supply well into 2020, with a projected 10,000+ unit deficit for the entire time period. As a result by 2020, the Occupancy Rate for the San Diego MSA, barring any unexpected increases in current construction levels, is forecasted to reach an all-time high of approximately 97%.

The San Diego MSA experienced a (44%) y-o-y decrease in 2Q 2017 unit deliveries with 430 new units delivered to the market. Nonetheless, San Diego area developers are on track to deliver 6,000+ new units by YE 2017. Despite elevated unit deliveries, occupancy rates for the MSA contracted slightly, (0.3%), to 96.8% while average rent increased 4.4% to $1,798. East County Submarket claimed the top spot in the MSA for rent growth at 6.7%, followed by South Bay at 5.5%, North County Inland at 4.9%, Metro San Diego at 3.8% and North County Coastal at 3.7%. Although North County Coastal saw the lowest average rental rate percentage increase for the MSA, it still claims the top spot in actual average rent which at $1,837 is the highest in the region.

The San Diego MSA has, on the whole, shown amazing resiliency in both up-and-down markets. Basis for this resiliency is most often correlated to perfect climate and people seeking it out. To wit I must agree but I also believe, with tangential data to support my hypothesis, that much of San Diego's success lies in the insularity of the investors who buy in the market, e.g. in 2Q approximately 70% of all unit transactions can be traced to San Diego area buyers. Although there are several opportunistic/value-add players in the market, most owners/investors can be classified as ‘long term, net holds;' in effect creating its own barrier to entry in addition to price point. Given the headwinds discussed in the paragraph above and lack of new supply will continue to fuel investor demand for San Diego multifamily.

To be followed with a more expansive ABInsight post on the topic, I want to leave you with a few thoughts, questions I have posited to various economists, business executives and investors: has the Federal Reserve's, along with the other central banks, massive balance sheet run-up (QE) and zero-to-negative interest rate policy created a banker's worst nightmare, i.e. deflation? By way of example, in our current cycle massive amounts of money have been piled into the development of artificial intelligence, production automation (think automated car production, 3D printed homes, robot burger flippers etc) and other technological disruptions, the effects of which are only beginning to feel and/or understand. As a result, and my final question, are we on the precipice of a massive reduction in the cost-of-goods? If yes, cui bono?