ABInsight | The End of The Freewheelin' Federal Reserve? Part Deux 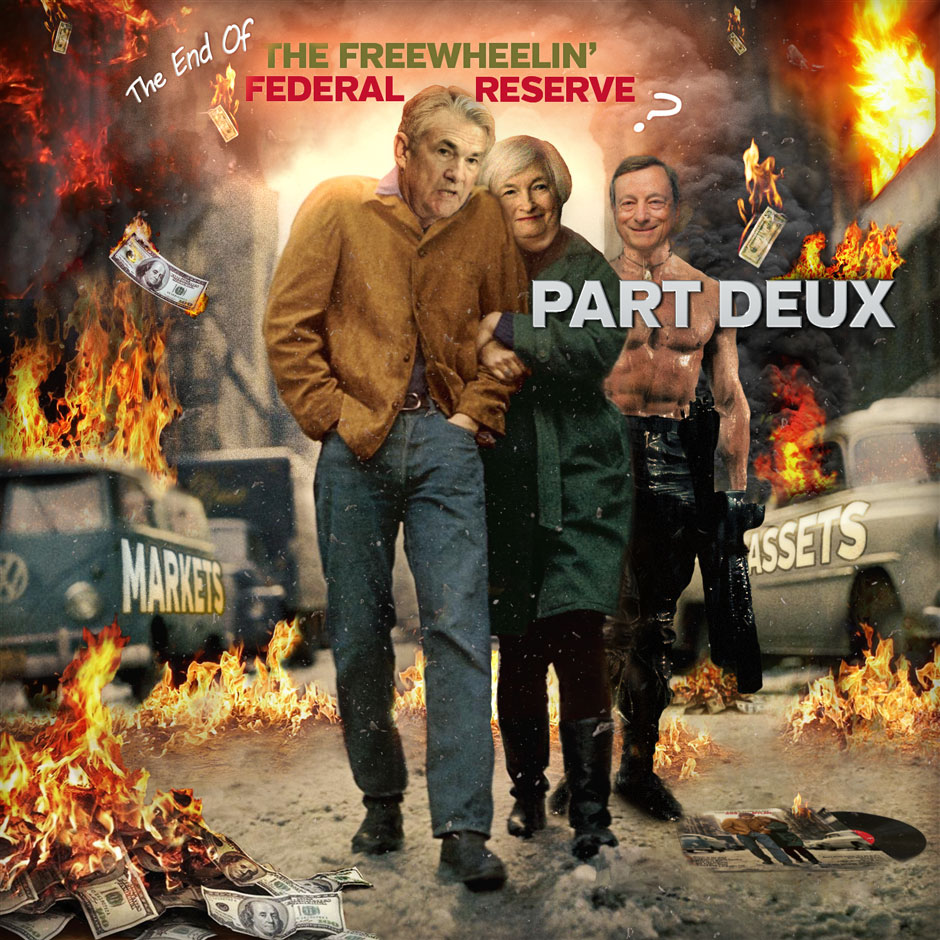 There's no ‘too soon' if time is relative.
-NOFX

Value for your thoughts
In Part 1 of this series, I looked at the macro-factors impacting investors from central bank balance sheet increases, interest rates, Investor Movement Index (IMX) and how changing demographics is transforming multifamily investments. I had intended to make Part Deux about the technological changes facing CRE and their potential future impacts on valuations, ownership, investing etc. However, before discussing technology trends/applications and their potential impact on asset ownership/valuations etc, I feel it prudent to first have a discussion on values. Specifically, what is it we value? What do you value? What a simple and infinitely complex question. How many times have you asked that of yourself, friends, and colleagues? There are many different ways to measure value, a component of which is price but we'll get to that later. One of the more salient ways comes from Dave Ramsey who stated, "give me your checkbook [bi-fold where you could balance your own account, how people used to pay for shit if there's any millennials reading this] and I'll show you what it is you value." Simply, what you spend your money on is a far better indicator as to what you value than anything you say or show on the outside.

Great Value Reset
As Jared Dillian at Mauldin Economics recently intimated in one of his 10th Man articles, Generation Gap, "you can split traders into two groups: Pre-crisis and Post-crisis. I am a pre-crisis trader. I remember a time when interest rates were high and currencies were strong. I remember when the Fed used to do things like drop 50bp intermeeting rate hike bombs on the market, when central banks used the element of surprise…..The point is that anyone who started their career after 2008 has a different view of things. Interest rates have mostly been zero and currencies are garbage. Central banks are afraid to upset the market."

For a great many of us ‘pre-crisis traders,' the Great Financial Crisis (GFC), due to its enormity, forced a fundamental reassessment of what it is we value and not of our own volition. During the GFC's apex, it lead to all sorts of neat questions, sarcasm included; Do you value food in your belly or a roof over your head? Is cashing out your savings to pay for your mortgage worth it? What is the difference between a home and a house? As with most things forced upon me, regardless of merit, I tend to spend a great deal of time vacillating between fits of self-pity to anger to apathy until I'm in just enough pain to either break or change; while this sentiment varies across all types of people and comes in many different shades I do feel, on the whole, it is part of the fabric of human existence.

The Fed Moved My Cheese
While most of us were embroiled in mitigating the after-effects of the GFC, with fits of self-reflection, Central Bankers, rightly or wrongly, were attempting to the stop the market's existential threat, namely the hemorrhage of liquidity. In the same way chemo has the ability to both help and hurt a cancer patient, Central Banker use of QE (Quantitative Easing) and manipulation of interest rates to either zero or negative, both eased the liquidity crisis while fundamentally changing the way we view and perceive risk.

How do we manage or perceive risk? How is that management expressed in the market? Interest, or more appropriately interest rates, often expressed as APR (Annual Percentage Rate) is the amount charged for the privilege of borrowing money. According to Investopedia, considerations when calculating the type of interest a lender will charge a borrower include:

What is R* (R-Star)?
From the Financial Times, "Conceptually, it is a fairly straightforward idea. R* [natural rate of interest] is the real short term interest rate that would pertain when the economy is at equilibrium, meaning that unemployment is at the natural rate and inflation is at the 2 per cent target. This might be described as the rate the Fed should adopt under "normal" conditions, though it might take a while to get there. When interest rates are below R*, monetary policy is expansionary and vice versa."

As us ‘pre-crisis traders/brokers/etc' can remember R*, or risk free rate of return, was, essentially, buying and holding T-Bills for a ~5% return or perhaps investing in TIPS (Treasury Inflation Protected Securities). As a result, whenever we valued a deal or project, intrinsically, we based our valuation models, returns against just letting our money sit in an account and earn 5%+. This assessment is best exemplified in NASRA's (National Association of State Retirement Administrators) February 2018 Public Pension Plan Return Assumption brief, "the investment return assumption used by public pension plans typically contains two components: inflation and the real rate of return. The sum of these components is the nominal return rate, which is the rate that is most often used and cited. The real rate of return is intended to reflect the return produced as a result of the risk taken by investing the assets. Achieving a return higher than the risk-free rate requires taking some investment risk; for public pension funds, this risk takes the form of investments in assets such as public and private equities and real estate, which contain more risk than Treasury bonds."

Given the past decade of zero-to-negative interest rates the entire developed world over, central banks have artificially thrust R* downward causing investors, whether knowing or unknowingly, to increase risk in order to attain greater yields.  You can begin to see the massive collision of perceived values and distorted risk calculations just over the horizon.

Peak Pricing, Now What?
Lastly, let's talk about price, or as I call it, true price as seen through the lens from above. I can pontificate ad nauseum about PPU metrics, CAP rate increases/contractions or GRM gyrations but it's a waste of time. Price, in any market, across all asset classes, is the amount one person/entity is willing to sell and the other is willing to buy. That is it, and in the words of Denis Leary, "end of fucking list!" Don't get me wrong, it's helpful to know the previously mentioned metrics to know where your investment stands, but it is not a necessary prerequisite for a transaction to occur.

With that said, many markets across the US have surpassed their peak sales price per unit amounts. As the chart below shows, the National Sales Price-Per-Unit (PPU) increased 69% from 2010 to 2017. 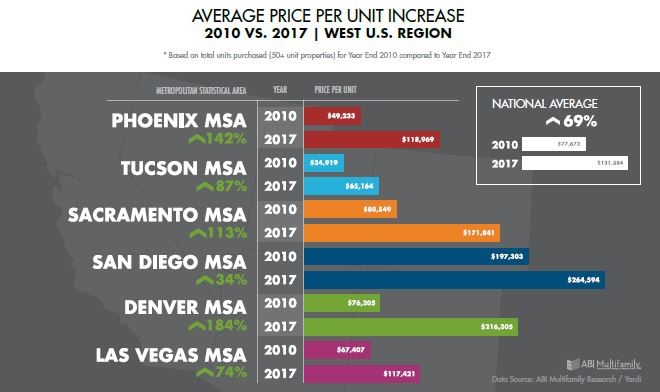 As discussed in my Phoenix MSA 3Q Report write-up, both Small CAP (5 to 49 units) and Institutional Grade (50+ units) investors, as a result of diminished R-star (natural rate of interest) have forced investors to hunt for yield. For Small CAP investors, Phoenix, and to a lesser degree Tucson, have become the top markets of choice for those investors who wish to realize gains from sales in more expensive markets, i.e. California, Pacific Northwest etc, and transfer to markets with more room for growth. For more Value Add minded Institutional Investors, the West/Southwest/Southeastern US, with their continued population and job growth, states such as Arizona, Utah, Georgia, North/South Carolina, Tennessee have become top US secondary market hot-spots, with Tucson, Sacramento and the like as prime tertiary markets.

Times They Are A-Changin
In the GMO 7-Year Asset Class Real Return Forecast published December 31, 2017 (chart below), shows average forecast returns are substantially below the 6.5% long-term historical US equity return average. In fact, the outlook is quite bleak, especially for public pension funds who have yet, in mass, to recalculate for a decade of sub 7.5% actuarial returns needed for solvency. 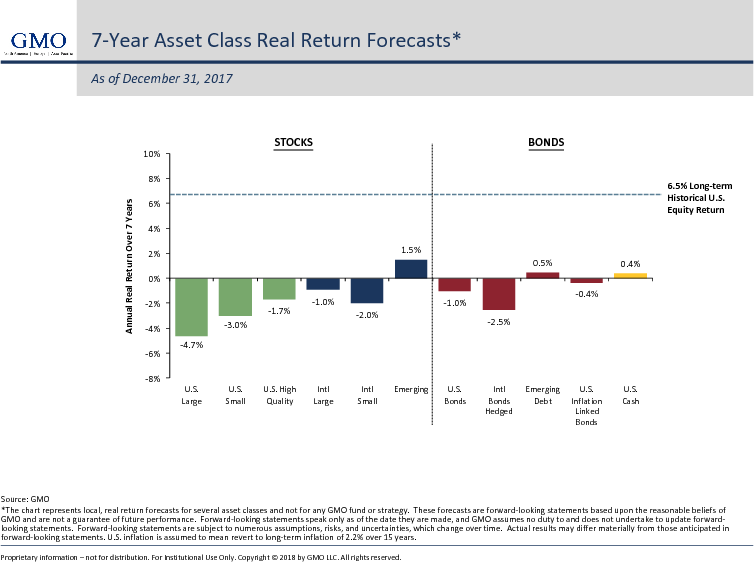 Final question/thought, suppose real estate return rates mean revert to average historical levels of 3.8%, across the board, and average rental rates soften to 2%+, contingent upon market, where else are you going to find a better return? Investors are slowly beginning to wake up to this new market reality and, my best guess without the benefit of a future indicating magical crystal ball, is that multifamily is where they will want to be.