ABInsight | The End of The Freewheelin' Federal Reserve? 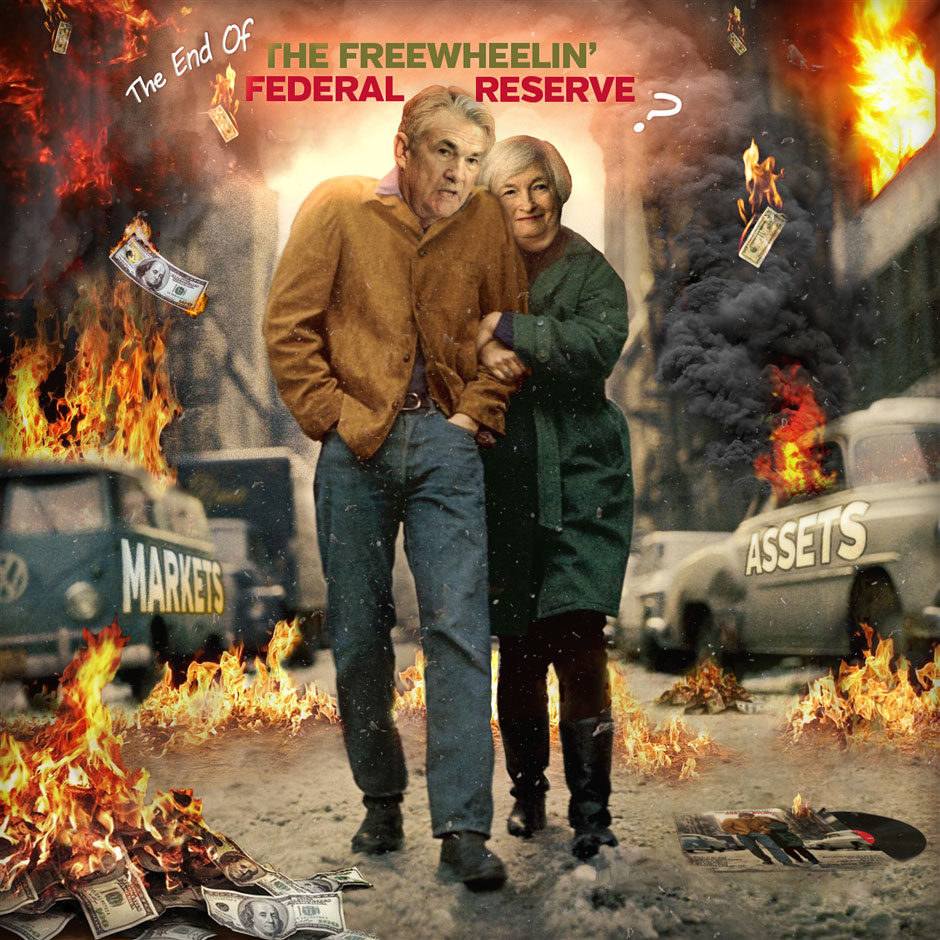 It feels good to be back in the writer's seat again. Before we begin, it's time for some quotes:

"We may not know where we're going, but we sure as heck ought to know where we stand."
-Howard Marks, Oaktree Capital

"When you walk around all mopey, m'kay, and sayin' everything is… just shitty, well, that's called bein' a Debbie Downer, Stan. And nobody likes a Debbie Downer, m'kay. …I mean you've gotta, you've gotta snap out of it, Debbie. Come on, Debbie, you're even bummin' me out now, m'kay? Your attitude just- just sucks."
-Mr. Mackey, South Park

F*****************ck!!!!! There, I said it. It's what we're all thinking on the inside despite quaint expressions or dismissive witticisms otherwise. Is it just me or does it feel like everything - markets, people, inanimate objects - have all gone, in the words of Lone Starr from Spaceballs, hyperactive? Inasmuch as I feel the strain of both market, and general life events, it's at these precise times to take stock of where we are, what we have and make an assessment about how best to proceed. I have no idea where/how each of you, individually or collectively, stand amidst this storm nor how you view it. In deference to Marks, quoted above, let us begin, well at the beginning.

Heard ten thousand whisperin' and nobody listenin'
In Janet Yellen's final interview before her exit as Fed chief she noted the risk of high asset valuations while making no reference to the Fed's 460% balance sheet explosion to $4.5 trillion and ZIRP policies, not to mention NIRP and direct equity/bond purchases by Central Banks abroad. Yellen's penultimate act as Fed Chair was to reacquaint markets with volatility. Markets, in the first few weeks of 2018, chalked up the largest single day point drop in Dow Jones history with 10Y UST's pushing near Bond King Jeffrey Gundlach's 2.99% bond bear market threshold. Given the ferocity of the market's current pogo stick corrections, increasing interest rates and tightening liquidity via QT we find ourselves in a new investment market ‘normal.' This new normal is one marked by violent market swings which, as I estimated correctly in the Year End report, sidelined more retail investors, evidenced below, as quants and active managed funds battled it out among the various asset classes.

For a reading on retail investor sentiment, I turn to TD Ameritrade's (h/t WSJ Daily Shot) ‘Investor Movement Index (IMX).' According to TD, "It's best to review IMX trends over time, rather than focusing on one month's score. If a score increases month over month, that likely means that investors are getting more bullish. If a score decreases month over month, that can either mean that investors are becoming bearish, or that they are less bullish than before. There are no defined bullish/bearish thresholds for the index. Scores should be viewed relative to other periods – the more scores you consider, the more likely you are to see trends that can be compared to other indices or market dynamics. For example: If the index decreased from one month to the next after hitting a new high, that may be because investors are taking profits and reducing exposure to the market. But relative to other periods, the score is still high – indicating that portfolios are still bullish." 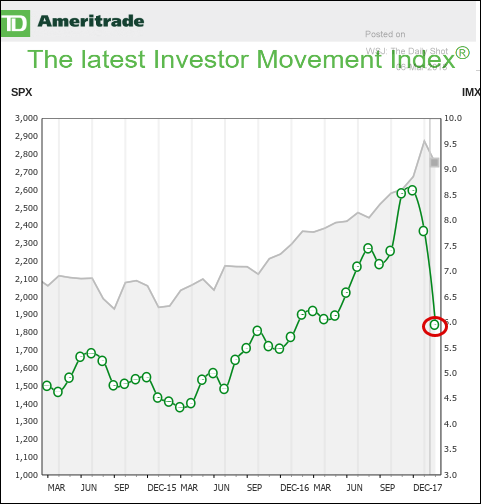 As suspected, it seems that retail investors are getting whiplash from the market's machinations with IMX crashing to levels not seen since election season 2016.

Interest Rates Rising? $4.5 Trillion Reasons To Not To
In the start to the oft used colloquialism, as I have stated in previous reports, "opinions are like…..(economists/analysts) just shop around for the analysis you wish to hear." In any forward looking projection it is impossible to quantify all the various potential permutations or direct/ancillary reactions to any given movement in the market or in government. With that as a qualifier, and on the minds of all investors, what are the chances that the Fed will continue to raise interest rates? Being ever the contrarian, often times for contrarian sake, I still believe we are closer to negative rates than we are to 4%+ rates. In December 2017, essentially the end of Yellen's reign at the Federal Reserve, the Fed voted 7-2 to raise its benchmark lending rate 0.25% to a target range of 1.25 to 1.5% with several hikes on the board in 2018. Enter stage left, courtesy of one of my favorite traders, Kevin Muir, That's Not a Bond Bear Market and ZeroHedge 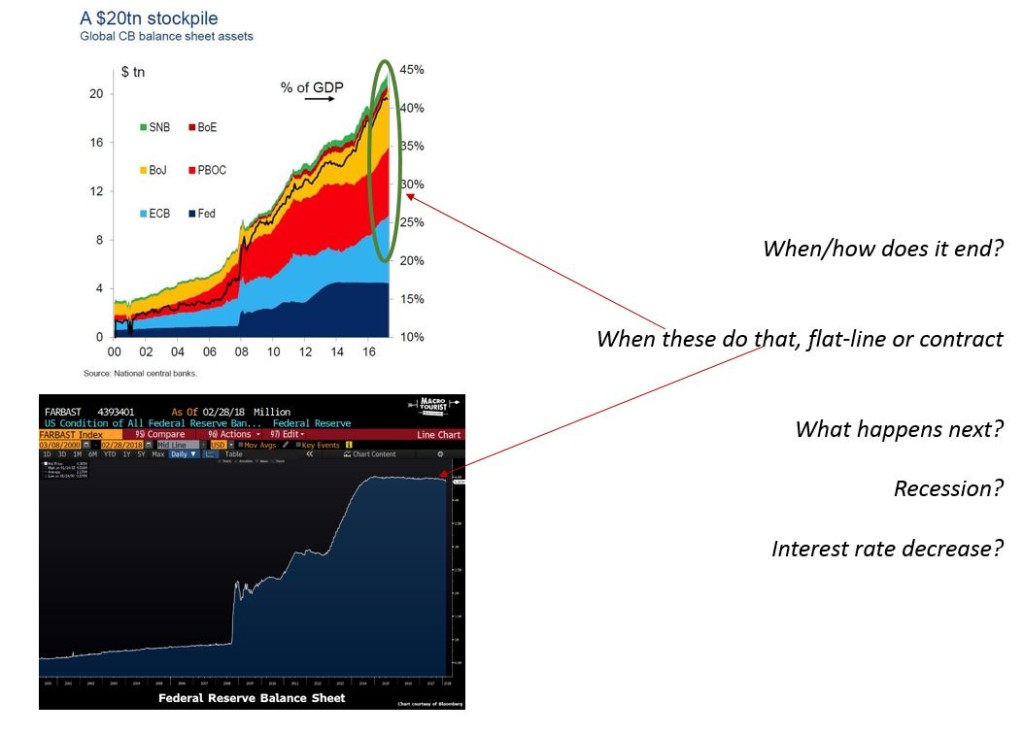 The top chart above shows global central bank balance sheet and the Fed balance sheet which went parabolic from 2008 through 2017. Central Bank balance sheet explosion now accounts for over 40% of global GDP, approximately $21 trillion. As Muir states, "More than half of it [US Federal Reserve holdings] is longer than five years in duration. Holding a portfolio of this monstrous size was all good and fine with rates at 25 basis points, but don't forget, as the Federal Reserve increases the IOER (Interest on Excess Reserves), they increase the cost of funds that they are paying out." Who pays those added costs? Look in the mirror. The Fed, and their central banker compatriots, are in one hell of a hole and, by extension all of us, the odds are greater they over/under correct than emerge victorious from this mess of their own creation.

What'll you do now my blue-eyed son?
I believe that we are living through a tectonic demographic shift pushing us further and further into a more renter-centric society, which started in earnest in 2011/12 and what we at ABI have coined ‘The Decade of the Renter.' I'll make no assertions whether this shift is good or bad, but make no mistake that it is happening. Based on Census estimates, at the National level, renter household levels have increased nearly 8% since 2000. More locally, the Phoenix MSA, as a whole, has witnessed a stunning 21% increase in renter households, impacting nearly 660,000 people, from 2000 through 2016. As the table below shows, this tectonic shift in the renter household population was led by Glendale, ~31% increase, Tempe, ~21% increase and Phoenix with ~20% increase.

The absolute explosion of renter households, first as the result of the GFC (Great Financial Crisis) and now by preference, influencing both young and old, is but one facet of an overarching trend. The effects of this generational shift coupled with the explosion of CRE tech, from a business perspective, are only now becoming more apparent; the impacts of which are changing the way we own, design, build, manage and sell. In Part Deux of this series I will dive deeper into what, I see, are the major technological shifts ahead and how they will, in essence, change the value question and, by default, how we invest.

Unknown Road
All of us economic and market pundits, to wit I belong, are desperately trying to make sense of what we think is, might and/or could happen. I'll go one step further, this time is different in that we have never seen, nor emerged, from central banker induced ZIRP (Zero Interest Rate Policy) and NIRP (Negative Interest Rate Policy) policies. As Muir laments, "who would have predicted a decade ago that sovereign rates themselves would trade with a minus sign in front of their yield? We have now accepted this abomination, but negative bond yields still boggle my mind." Which is the greater abomination, the start of the policy or its acceptance? How you answer should inform how you invest.

Although I act as the Federal Reserve's court jester, akin to Mark Russell's comedy shows during elections in the 80s/90s, I both appreciate, and lament, the enormity of their task. It is the height of human folly to believe we can somehow control and/or contain the market. History is replete with vain attempts at control, but I digress.  However all is not dark and dreary, as Elliott D. Pollack in his 'Monday Morning Quarterback' email commented, "Will we pay the piper at some point? Sure. The economy is cyclical. That's life. But, right now the cycle is up and the party is likely to continue. Will interest rates go up? Yes. Will inflation increase? Most likely. But, right now, things look very good. On Friday, the stock market obviously liked growth more than it dislikes tariffs. So, enjoy the best economy we've had in the last decade. And it should last for the next year or two at least." With the ECB, BoJ et al continuing to stay the QE course, perhaps he's quite right.